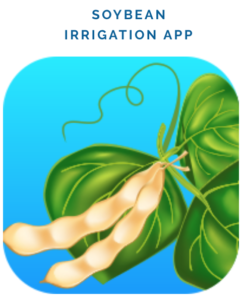 Georgia soybean and blueberry farmers will soon have smartphone applications to supplement their practical knowledge with technical data on when to irrigate crops.

The SmartIrrigation app, set to be released this year for both iOS and Android devices, uses detailed weather data to estimate how much water a crop needs. The app then sends the user a notification when irrigation should be applied instead of farmers applying water when they think their crop needs it, says George Vellidis, precision agriculture specialist on the University of Georgia Tifton campus.

“These new apps will allow soybean and blueberry growers to better schedule their irrigation events so that they can maximize water use efficiency for their crops. In other words, they can get more crop per drop of water used,” says Vasileios Liakos, a UGA assistant research scientist working with Vellidis, who led the development of these two apps at UGA. “This should also increase their profitability.”

UGA scientists, with colleagues from the University of Florida, have developed smartphone applications for multiple commodities, including cotton, citrus, strawberries, vegetables and residential turfgrass. An app for corn is currently in development and will be available in 2020.

During research studies at UGA, the apps proved to be more efficient than common irrigation scheduling methods. For example, over the past five years, using the cotton app resulted in an average reduction of 44 percent in irrigation water use and an average yield gain of 13 percent compared to the UGA Cooperative Extension calendar or checkbook method.

“The apps have the same type of improvement in irrigation scheduling, water use and yield improvements we see when using soil moisture sensors,” Vellidis says. “This is pretty remarkable since the only data we are collecting from the field is measuring rain with an automated rain gauge. Using the apps is much easier and considerably cheaper than using almost any type of automated soil moisture sensor.”

Vellidis and his team also have developed SmartIrrigation tools, such as variable rate irrigation (VRI), to help producers become more efficient with water use.

VRI allows center-irrigation pivots to apply different amounts of water to individual management zones within a field. Since the soil and landscape are not the same throughout a field, VRI technology helps the producer apply the precise amount of water needed in each area for optimum crop growth. The application rates are coded into a prescription map for that field. Once developed, the same rates can be used throughout the growing season every year.

“Our approach for creating dynamic prescription maps is to use large numbers of soil moisture sensors to estimate the amount of irrigation water needed to return each irrigation management zone to an ideal soil moisture condition,” Liakos says.

For more information on this research, visit smartirrigationapps.org.

The University of Georgia contributed this article.