David Wildy, a diversified row-crop producer near Manila, Ark., was named the 2016 Swisher Sweets/Sunbelt Expo Southeastern Farmer of the Year.

Wildy, who was named the overall winner during the Willie B. Withers Luncheon, was chosen from among 10 state winners who were finalists.

A graduate of the University of Arkansas, he began farming full time in 1975. Wildy Family Farms is a fifth-generation operation originally founded by David’s grandfather in 1914.

Wildy farms more than 12,000 acres and grows cotton, corn, soybeans and wheat. Two years ago he added peanuts and this year he began growing potatoes. He also has a small beef cattle herd.

His yields are impressive, according to a news release from the Sunbelt Expo.

About 90 percent of his ground can be irrigated, and Wildy employs a mix of furrow and center-pivots. With the furrow irrigation, he uses surge valves along with the Phaucet computer program that determines the size and placement of holes in collapsible irrigation tubing.

One of the farm’s current research projects involves refining its approach to precision farming. The goal is to determine whether increased will economically benefit low-yielding areas or whether crop inputs should just be reduced in minimize economic losses in those part of the field.

Wildy also is known for cooperating with researchers from the University of Arkansas, Arkansas State University, the U.S. Department of Agriculture and private industry.

Now in its 27th year, the Farmer of the Year award recognizes excellence in agricultural production and farm management along with leadership in farm and community organizations. 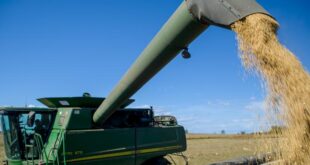