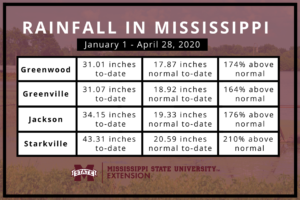 The beginning of May brought a welcome sight for Mississippi producers: sunny skies and drying fields.

For the second straight year, precipitation levels well above normal in the winter and early spring have slowed planting significantly across much of Mississippi. Gaps of days between rains have not been long enough until now for many fields to sufficiently dry. Some fields have been under water for more than a year.

According to Mike Brown, state climatologist and professor in the Mississippi State University Department of Meteorology, the Delta towns of Greenwood and Greenville have received just over 31 inches of rain so far in 2020 — more than 160% above normal for this time of year. But Delta farmers waiting for their fields to dry are in good company. To date, Jackson has seen more than 34 inches, which is 19 inches above normal.

“Starkville has seen 43.3 inches, which is 20 inches and 210% above normal through April,” Brown said. “Our annual rainfall total would still be above normal if it stopped raining until September.”

Accumulations in portions of the state’s Delta region are once again at levels that are causing rivers to overflow, spilling over into an estimated 200,000 acres of farmland.

“In the portion of the Delta that isn’t affected by flooding, untimely rains have had a tremendous effect on planting, spraying, fertilizer applications, cropping mix and cropping decisions,” said Ben Lawrence, an agronomist with the MSU Extension Service. “In the areas affected by the continuous flooding, it is reliving 2019, which would have been unimaginable for two years in a row.

“Several thousand acres have been under water for over a year and half in places,” he said.

Phillip Vandevere, an agent with the MSU Extension Service in Yazoo County, said that if the wet weather pattern observed through the first quarter of 2020 returns, some low farmland will remain flooded and out of production.

“Yazoo County is half hills and half Delta flatland. Earlier in the spring with the large rain events, you could really see soil erosion. We even had mudslides,” Vandevere said. “Growers are working up the ground and planting up to where the water still is or has recently gone down. If they try it while the ground is still too wet, they are compacting the soil with tractors or even getting their equipment stuck.

“Some of the same farmers are still seeing water — not fields,” he said.

Erosion is causing some cropland in the Delta to lose its most important element: top soil.

“We can overcome some nutrient losses by applying extra fertilizer, but it comes at a cost,” said Preston Aust, an MSU Extension agent and row-crops specialist in Humphreys County. “Soil saturation during the early stages of a plant can also be detrimental. Young seedlings struggle to take up nutrients due to insufficient respiration in a saturated environment.”

An even worse problem than erosion and nutrient loss, Aust said, will be compaction caused by the equipment used to plant — especially in corn.

“We will have to live with ruts caused by planting for the rest of the season,” Aust added. “These flooded areas have had water on them since the first day of the year, and it hasn’t gone anywhere yet. There has been zero opportunity to do anything on these acres, and the later we get on the calendar, the more you will see producers ‘pushing it’ to get the crop in the ground.”

Even fields that look dry and have not absorbed rain in several days can be too wet for planting.

“In instances of planting into marginal field conditions, some of the more obvious indicators of soil that is too wet is water or a slick appearance in row middles and ponding on the low ends,” Lawrence said. “When soil appears dry on the surface but may be too wet below the surface, a shovel is a good way to determine how wet the field is below the surface.”

Fields that have been under water and out of production for prolonged periods are ideal environments for the propagation of new weeds, Lawrence said.

“The proliferation of troublesome weeds when land does go back into production is costly to growers, as is the cost and profit loss due to soil maintenance and/or additional fertilizer applications,” he said. “Everything leaving the field that a grower has applied or maintained is a direct monetary loss if additional input applications are required.”

For now, producers whose fields are dry enough for planting equipment are taking advantage of this window of cooperative weather.

“Producers know it is very critical from a yield perspective to get crops in during the high-yield planting windows,” Aust said, “and they know what is on the line.”