This month, Dr. Kurt Guidry, an agricultural economist with LSU AgCenter in Baton Rouge, shares his thoughts about the current soybean market. Following are his comments:

This is compared to the first quarter of the marketing year in which total soybean use was up more than 35 percent from the previous year. So, while year-to-date soybean use continues to outpace last year’s performance, the quarterly report has definitely showed that total demand has slowed.

Increased competition resulting from record supplies in South America has likely led to this slowdown in demand and will likely limit total soybean use for the remainder of the marketing year. How much this slowdown in demand will continue to impact prices as we move further into 2013 likely depends on how the 2013 crop develops.

The planting intention report indicated that soybean acres would remain mostly unchanged in 2013. However, with planting delays being reported in many major growing areas, there is starting to be concern of acres originally intended to be planted to corn being shifted to soybeans. While there is still time for planting progress to catch up, short-term weather forecasts continue to call for wet conditions and increase the concerns for the market. Increased soybean acres in 2013 along with slower demand could be the recipe for lower prices.

Even though there seems to be a buildup of negative factors facing this market, the fact remains that carryout for the 2012/13 marketing year is only projected to be 125 million bushels. With stocks this tight, it is difficult to see the risk premium totally being removed from this market. While the potential for more acres than originally anticipated seems to grow each day that wet conditions remain in the Midwest, it is difficult to project that prices will see considerable downside pressure until the market is more comfortable with yield potential on whatever the number of acres we end up with.

More acres would certainly lower the upside of a projected range for prices for the 2013/14 marketing year, but it seems too early to make significant changes to the lower end of the projected range. Given the current view of this market, it still seems reasonable that soybean prices will remain somewhere in the $12.00 range in the short term.

In the longer term, prices will be shaped by the size of the 2013 crop and its impact on the supply and demand balance for the 2013/2014 marketing year. However, until the market has a better handle on this situation, expect prices to remain fairly volatile.

Soybean South would like to thank Dr. Guidry for contributing the market update for this issue.
If you have comments, send them to Corn South, 1010 June Road, Suite 102, Memphis, Tenn., 38119. You may also call (800) 888-9784 or contact Lia Guthrie at lguthrie@onegrower.com or Carroll Smith at csmith@onegrower.com. 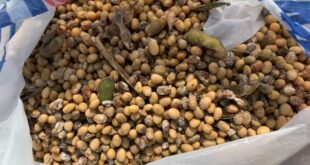