A combination of factors to consider for your fields.

When it comes to selecting soybean varieties for the 2023 season, it’s never too early to consider what factors might play into your planting decisions. Many soybean specialists across the Mid-South and Southeast provided their thoughts regarding variety selection. They discussed maturity groups, plant size and stature, row spacing and other considerations used to best determine varieties for the coming year.

Specialists from Louisiana, Mississippi and Missouri spoke on maturity group, performance, plant size and stature based on row spacing, pod and seed deterioration and other thoughts related to their regions’ decisions when it comes to choosing soybean varieties.

Beginning in the southeastern part of Missouri, Dr. Justin Calhoun, an assistant Extension professor and soil and cropping systems specialist at the University of Missouri, said mid-group 4s prove to be strong contenders in terms of maturity groups in that portion of the state.

He emphasized weeds in his trait recommendations.

“Weed control is our main consideration in pest management, so I always recommend a soybean variety that has multiple herbicide tolerances for the most diversity in weed control options.”

Calhoun mentioned his back-and-forth preferences for plant size and stature and stated most of their soybeans are grown on 30-inch to 38-inch rows. He said he’d typically opt for the “shorter, ‘squatty’ plant” but has seen some impressive taller plants this year as well. He said taller plants can have more internode area containing fewer or no pods but that the biggest consideration with those varieties is lodging, noting how current year plots fell over. 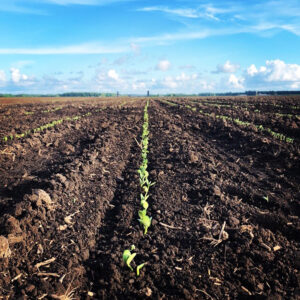 “Early planting provides several benefits: early season rains, avoidance of late-season drought, avoidance of late-season disease and insect pressure, canopy closure before weed emergence temperatures and early harvest to avoid over-loaded schedules later in the season. I think this practice is a major contributor in what has driven the yield potentials up across the South.”

In Louisiana, Dr. David Moseley, an assistant professor and soybean specialist at LSU AgCenter detailed the differing
maturity groups based on the separate regions in the state. Overall, he explained a maturity group of mid-to-late 4 planted in April has shown to have the most yield potential.

He emphasized yield potential in both a similar environment, noting soil type and weather pattern, and across multiple environments and years that show yield stability should be looked at before selecting a variety.

As far as plant size and stature go in accordance with row spacing, Moseley made several points:

→ Narrow rows (less than 30 inches in width) have shown to have the highest yield potential, but the results are inconsistent.

→ There’s not too much yield difference between different narrow row spacing widths (i.e. 7.5, 15 or 20 inches).

→ There may not be too much yield difference between 30 inches and 38 inches, but the more narrow the row, the faster the canopy closure, which helps with weed control and evaporation loss.

→ A taller plant will help the canopy close, but plants that are too tall are more likely to lodge.

Moseley concluded by speaking of planting early maturing/indeterminate varieties in April as done in the early soybean production system (ESPS). 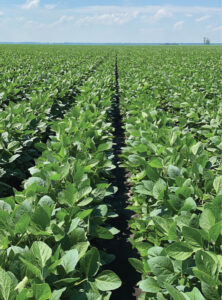 “This has helped increase the yield in the Mid-South. However, there is probably a seed quality reduction as the seed are maturing in the hottest and driest part of the year,” he said.

He commented on looking at yield potential in conjunction with other characteristics “such as a variety’s potential for lodging, shattering, or green stem, as well as overall disease tolerance package are important as well” when selecting a variety.

“In Mississippi, the majority of our soybeans are grown either on 38-inch, single-or-twin rows or on 30-inch rows. Plant height characteristics are important, depending on the soil texture of the field. For wider rows, it is important to select varieties capable of reaching a full canopy given the wide row spacing,” he said on the relationship between row spacing and plant size.

As far as timing is concerned, Irby said it’s been proven that planting early maturing/indeterminate maturity group 4 varieties early in the season is key to increasing yield potential when compared to planting later-maturing maturity group 5 or 6 varieties at a later planting date.

The Southeast region also selects varieties by considering maturity group, performance, row spacing, plant size and other factors. Four specialists from Alabama to Virginia speak on their observations and recommendations when it comes to making variety decisions.

Alabama soybeans by characteristics and region

Alabama grows a wide range of maturity groups based on latitude.

Francisco said he’d normally expect to see plant heights ranging from 30 inches to 38 inches and that narrower row spacing tends to stimulate plant height in Alabama, depending on plant population.

Regarding pod/seed deterioration, he said early maturing varieties are very sensitive to stressful weather events, but the indeterminate characteristic helps cope with that challenge.

Culmination of factors in South Carolina

In South Carolina, Dr. Michael Plumblee, an assistant professor and corn and soybean Extension specialist at Clemson University, said they typically plant maturity groups 5 to 7 depending on the planting date.

“In terms of performance, several varieties have good Southern root-knot nematode resistance, which in our region should be considered when selecting varieties. Disease resistance and herbicide technologies are also important factors that soybean farmers must consider,” Plumblee said.

He said yield is a huge driving factor in variety selection in the state, so evaluating local OVT and county-level variety trial results are important each year.

Plumblee commented that South Carolina soybeans are planted on just about every row spacing available — from drilled soybeans on 7.5-inch rows to those planted on 38-inch rows.

As for those planted later in the season, Plumblee recommends selecting taller varieties.

“We do plant some acres every year within the ultra-late planting window where soybeans are double cropped behind corn (planting late July through mid-August). At this point, plant height is crucial for harvest, so selecting tall varieties — and planting at higher seed rates — is important during this planting window.”

Plumblee stated South Carolina does plant some early maturing indeterminate varieties that have good yield potential, but they don’t often fit with the state’s cropping systems — where harvest interferes with corn, peanut and cotton. 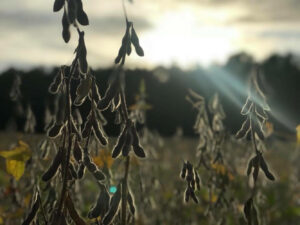 “From our experience, maturity group 4 soybeans don’t weather well, which can be problematic if harvest isn’t timely or if excessive rainfall occurs with a hurricane. From our research, we haven’t seen a significant yield increase by planting a maturity group 4, indeterminate soybean compared to determinate maturity groups 5, 6 or 7s, across a range of planting dates in typical soybean production dryland conditions. Therefore, planting later maturity group soybeans helps with harvest logistics and allows to avoid some quality issues that’ve been observed with the early maturity groups.”

“Some of the most important [factors] include planting date, harvest timeline in the fall and yield environment.”

Vann provided the dataset NC State is generating on optimal maturity groups to use in North Carolina soybean production. This can be viewed at tinyurl.com/NCsoybeanguide.

Beyond yield and yield stability, she commented on a few other factors to consider for variety selection:

Virginia is for soybeans

In Virginia, Dr. David Holshouser, a professor and Extension soybean agronomist said late maturity group 4 soybeans are the most widely grown and provide the best average yields, whereas maturity group 5 beans will mature later and can be harvested after peanut and cotton; so they’re a better fit into these cropping systems.

“I always recommend spreading out the maturities to reduce risk — we’ll almost always have intermittent drought; but that drought is unpredictable. For double-crop soybean, I always recommend growing the latest maturities that will mature before a frost. This will give the late-planted crop more time to grow more leaf area, which is sometimes the most yield-limiting factor for late-planted soybeans,” he said.

Holshouser said narrow rows are important for maximum yield as they allow fast canopy formation that captures more sunlight and better manages weeds. He recommends 30-inch to 36-inch rows when compaction is present and ripping under the row is needed to break it up, if an expensive nematicide to control nematodes will be needed or if one’s cropping system doesn’t justify a narrow-row planter.

He said the results of implementing ESPS in Virginia can depend on soil type.

“If on good soils and/or irrigated, this will work well.  If on droughty soils, then I see no advantage and several disadvantages. If one does decide to plant in April, then early varieties may have an advantage. I wouldn’t use a determinate maturity group 5 as my experience is that planting so early will trigger flowering before the longest day of the year and result in short plants. I’d use an indeterminate variety when planting early. My data shows no advantage of using an early-maturity variety (maturity group 3 for us); in the end, the late-maturity group 4s work best.”

“Anytime we are maturing seed during warm AND wet conditions (usually September), seed quality will suffer due to seed diseases such as Phomopsis seed decay. Later plantings and later varieties will almost always result in the best seed quality,” he said.

For more information regarding soybean variety selection in the Mid-South and Southeast regions, reach out to your Extension soybean specialists.