Robby Bevis views his soil as a complex living web that has a symbiotic relationship with plant roots. When roots are absent, such as during the winter fallow period, the soil starts to suffer.

That’s why Bevis, who has about 3,000 acres of corn and soybeans near Lonoke, Arkansas, is a firm believer in no-till and planting winter cover crops to reduce the number of root-free days to as few as possible.

“I’m wanting to have something living in the soil as much as possible,” he says. “I’m trying to plant right behind the combine, but there’s still a window when there’s not a living root in the soil.”

He converted to no-till in the late 1990s and added cover crops in 2012. Since then, Bevis has seen his fertilizer use decrease, his soil erosion decline, and his soil organic matter and soil water-holding capacity increase, to name a few benefits. More importantly, he says, he feels more confident about maintaining his operation’s profitability.

Bevis isn’t the only proponent of cover crops and no-till. Like-minded growers formed the non-profit Arkansas Soil Health Alliance a few years ago to help promote the practices and educate fellow growers how they can incorporate winter covers into their operations.

Nevertheless, cover crops do come with a few challenges, such as Bevis experienced during 2018. Because of wet conditions during the fall, harvest was slowed and fields were rutted, cutting in half the acres he was able to put into cover crops.

Bevis was quick to point out that last season was the first time he wasn’t able to plant nearly all his farm to winter covers.

Having a vegetative cover on the soil also keeps it a few degrees cooler than bare ground and delays planting in the spring.

“You have to have a lot of patience,” he says. “I can plant two to three weeks behind everybody else, but I might be only one week later at harvest.”

Bevis uses a number of different blends, depending on the field and the crop that will follow. The mixes typically have two grasses, at least one legume and one brassica. The grasses comprise no more than half the total blend.

One mix, for example, may have black oats, cereal rye, vetch and a tillage radish.

If the cover is following soybeans, which means the field will be planted to corn the subsequent year, Bevis says he likes to boost the legume component by possibly adding a winter pea and clover. The goal is to build soil nitrogen for corn, which is a heavy user of the nutrient.

Bevis plants the cover immediately following harvest using a Great Plains minimum-till drill and a seeding rate equivalent to 35-40 pounds per acre. The rate is a balancing act between having enough seed to germinate, creating a dense cover and biomass, and remaining economical.

Another key is figuring how long to let the cover grow before termination. If you terminate too early, you don’t obtain the cover’s maximum benefits from organic matter and nutrients. But wait too long, and you have too dense a mass to plant into and burn down.

Just before planting, Bevis runs a roller over the cover crop. He returns to drill his beans, followed by a burndown application of glyphosate or glyphosate followed 48 hours later with Gramoxone. The vetch in the blend keeps the grasses from popping back up after rolling.

Because of the thick thatch over the rows, some growers may be concerned the beans aren’t germinating. That’s where Bevis says putting boots on the ground is crucial.

You have to walk into the field, gently pull away the matted layer and check for soybean germination.

“The last two years, I’ve planted green,” he says. “I kill it when we plant it. We get good stands and there haven’t seemed to be any issues.”

Since he’s begun the no-till and cover crops regime, Bevis has reduced his use of fertilizers. He bases all of his applications on yearly soil samples.

For the past two years, he has not needed any phosphorus or potassium for his soybeans, a savings of $60-$80 per acre. He’s also stretched his soybean irrigation intervals to 10-14 days from his previous 5-7 days.

During 2018, his soybean yield across all fields averaged nearly 50 bushels per acre. But Bevis warns he only cut back phosphorus and potassium fertilizer after building soil health with several years of cover crops.

“I wouldn’t recommend somebody come straight out of full conventional and go cold turkey and go without fertilizer,” he says.

Bevis also has reduced his nitrogen applications in his corn by 20-40 units per acre. Where he once applied 200-250 units total N per acre he now uses 180-200 units per acre. 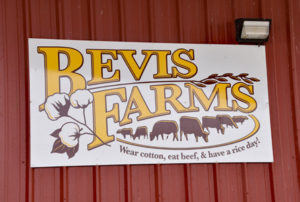 Not only does it provide food for soil microbes, but the organic matter helps with water infiltration and erosion control.

Another myth Bevis wants to dispel is planting cover crops takes more time than conventional tillage. Quite the opposite is true, he says.

In a conventional system, growers may disk the soil, then apply a pre-emerge herbicide in the fall. They may return before planting in February, tilling again and applying another pre-emerge, followed possibly by more tillage and another herbicide application.

With his system, Bevis makes one pass in the fall to no-till drill his cover crop into the remaining stubble. His total investment is about $30 per acre compared to probably $70-$100 for tillage. And he’s able to spend more time with his family during the fall and winter since he’s not in a tractor pulling tillage equipment.

Ask any farmer-member of the Arkansas Soil Health Alliance about cover crops and no-till, and they’re likely to extoll the multiple benefits they’ve gained. But they also will probably admit they don’t have the scientific data to back some of their beliefs.

“As scientists, we want to put numbers to it and document it,” says Daniels, a University of Arkansas professor of Crop, Soil and Environmental Science in Little Rock.

Joining Daniels is Matt Fryer, a University of Arkansas soils instructor who will coordinate the demonstrations and collect much of the data.

In a related project, Steve Green, a professor of soil and water conservation at Arkansas State University, will lead research to determine how much farmers can reduce mineral nitrogen fertilizer and irrigation through the use of cover crops. As part of the project, funded by a $300,000 NRCS grant, Green also will demonstrate how cover crops can be profitable in a cash crop system.

The cover crop project will involve 25 demonstration sites, with at least one in each county in eastern Arkansas. Each farm cooperator will agree to participate for three years, a period Daniels and Fryer say is needed for them to begin to see the effects of cover crops on the soil.

Each demonstration will feature two side-by-side fields. One field will be planted in winter cover crops, followed by no-till planting of the cash crop. The adjacent field will have no cover and be planted using the grower’s conventional tillage method. The crop rotation on both fields will be left to the cooperating farmer.

Because of wet weather during the 2018 harvest, only six of the demonstration sites were planted to cover crops. Fryer says the big push will be this fall, as the remaining farms receive their first cover crop treatments.

Soil Health Alliance members will be involved to help guide the research and host educational and training sessions for farmers and other participants.

County agencies also will be enlisted and will work closely with Natural Resources Conservation Service counterparts.

In addition, Daniels says they plan to bring in university specialists to examine whether the cover crops could create pest problems or provide green bridges that allow pests to overwinter. On the flip side, the covers also may provide habitat for beneficial insects and spiders.

One of the project’s goals is to help better define what constitutes soil health and the roles cover crops may play. Among the data they plan to collect are water infiltration rates, soil aggregate stability, soil bulk density, soil fertility and crop yield. Fryer says he also hopes to run an economic analysis of each Discovery Farm demonstration site in the end.

Another question they hope to answer is as soil health improves, how does that affect soil test recommendations.
As part of the project, they plan to document challenges that come with cover crops.

“For us to sell cover crops, everybody has to learn what can and what cannot be done with them,” Daniels says.