DuPont and Dow have announced they plan to merge into one company — DowDuPont — then spin off three independent publicly traded companies. Those firms would focus on agricultural, material science and specialty products.

Combined, the two are worth about $130 billion, according to a news release. The merger would provide about $3 billion in savings.

Combined pro forma 2014 revenue for agriculture was about $19 billion.

Boards of both companies approved the merger unanimously in early December. The spin-offs are expected to occur during the next 18 to 24 months, subject to regulatory and board approval.

Dow is based in Midland, Mich., with DuPont based in Wilmington, Del. After the merger is complete, DowDuPont will have dual headquarters. 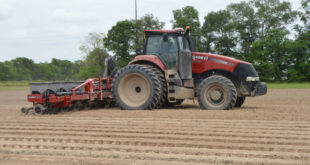