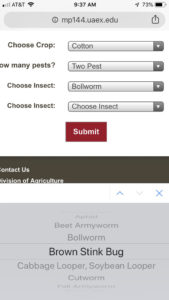 The University of Arkansas’s MP-144, also known as “Insecticide Recommendations for Arkansas,” has gone mobile.

Producers, agricultural agents and consultants will now have access to a comprehensive database of insecticide information at their fingertips, with the University of Arkansas System Division of Agriculture’s launch of a mobile-device-friendly version of the insecticide manual.

Glenn Studebaker, Extension entomologist for the Division of Agriculture, says he had received many inquiries in recent years from producers seeking quick access to the recommendations contained in the MP-144 in a more accessible format.

“It’s a 300-page document, so it’s not exactly the sort of thing you keep in your pocket,” Studebaker says. “We’ve had the MP-144 in PDF format on our website for several years, but on a smart phone, that’s not always convenient, either.”

The mobile-friendly version of the publication provides access to pesticide recommendations at http://mp144.uaex.edu/. The site is optimized for mobile devices, including smartphones and tablets, so users can avoid the “pinch and scroll” common to the navigation of older websites not designed specifically for more modern devices.

Through a series of drop-down menus, users can select the crop they’re interested in protecting, as well as up to two pests they’re trying to control. The site will then provide a list of appropriate pesticides, including their application rates, restricted entry intervals and other information.

Cole says the team chose to make the MP-144 available as a mobile-friendly web page rather than a downloadable application because upkeep for a web page tends to be much more manageable than that for an app, distributed either through Apple, Google Play or other centralized “app stores.”

“Those can be really difficult to maintain,” Cole says. “There’s a constant demand for small changes and updates, which can place a huge burden on staff. By making things web-based and mobile-friendly, we’ll be better able to adapt to things with the resources we have.”

He says that although users will need an Internet connection to use the online database, the results tend to load quickly and the page won’t disappear if connectivity is lost.

Currently, the online MP-144 recommendations are limited to row crops, although Studebaker says he is steadily adding recommendations for fruits, garden vegetables and other specialty crops to the database.

Cole says the Cooperative Extension’s Information Technology department hopes to work with Division of Agriculture specialists to also create mobile-friendly versions of the MP-44, which deals with weeds, and the MP-154, which deals with diseases and pathology.

Share
Facebook
Twitter
Print
Linkedin
Email
Previous article
To plant or not to plant? Consider these 3 options
Next article
University of Arkansas Soybean Economic Notes, May 31, 2019