Texas A&M AgriLife Extension has launched a new budgeting tool that will allow growers to decide the optimal mix of irrigated crops for the Texas High Plains.

“We wanted to create a decision aid that assists irrigated operators in making management decisions on the optimal crop mix for their land,” Steve Amosson, Texas A&M AgriLife Extension Service economist in Amarillo, says in a news release. “And while High Plains’ budgets are used, the flexibility of this program makes it easily usable in other areas of the country.”

The tool contains budget cost estimates that are averages, but it also allows users to modify the budgets and input their actual costs and yields.

Based on the information and crop budgets, the tool calculates the amount of land and profitability for each crop and presents the results numerically and graphically.

Users also are able to toggle on or off crops, limiting the analysis to only the crops they’re interested in producing. 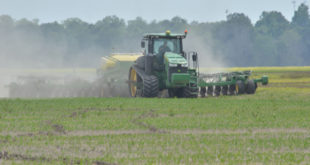