Too little or too much rain plagued Missouri soybeans this season

Most soybean and corn likely will yield less than normal this year due to late planting and unfavorable weather during critical grain-fill periods, says University of Missouri Extension soybean specialist Bill Wiebold.

According to a Sept. 4 U.S. Department of Agriculture Farm Service Agency report, wet and flooded fields kept Missouri farmers from planting 750,000 acres or 21% of corn and 480,000 acres or 9% of soybean.

Farmers planted most intended acres, but after the optimal time. USDA’s National Agricultural Statistics Service says about 50% of planted corn emerged after May 26. Half of soybean emerged after June 23.

Yield depends largely on weather at certain growth stages—July and August for corn and August and September for soybean. Temperature and rain during grain fill affect yields greatly. 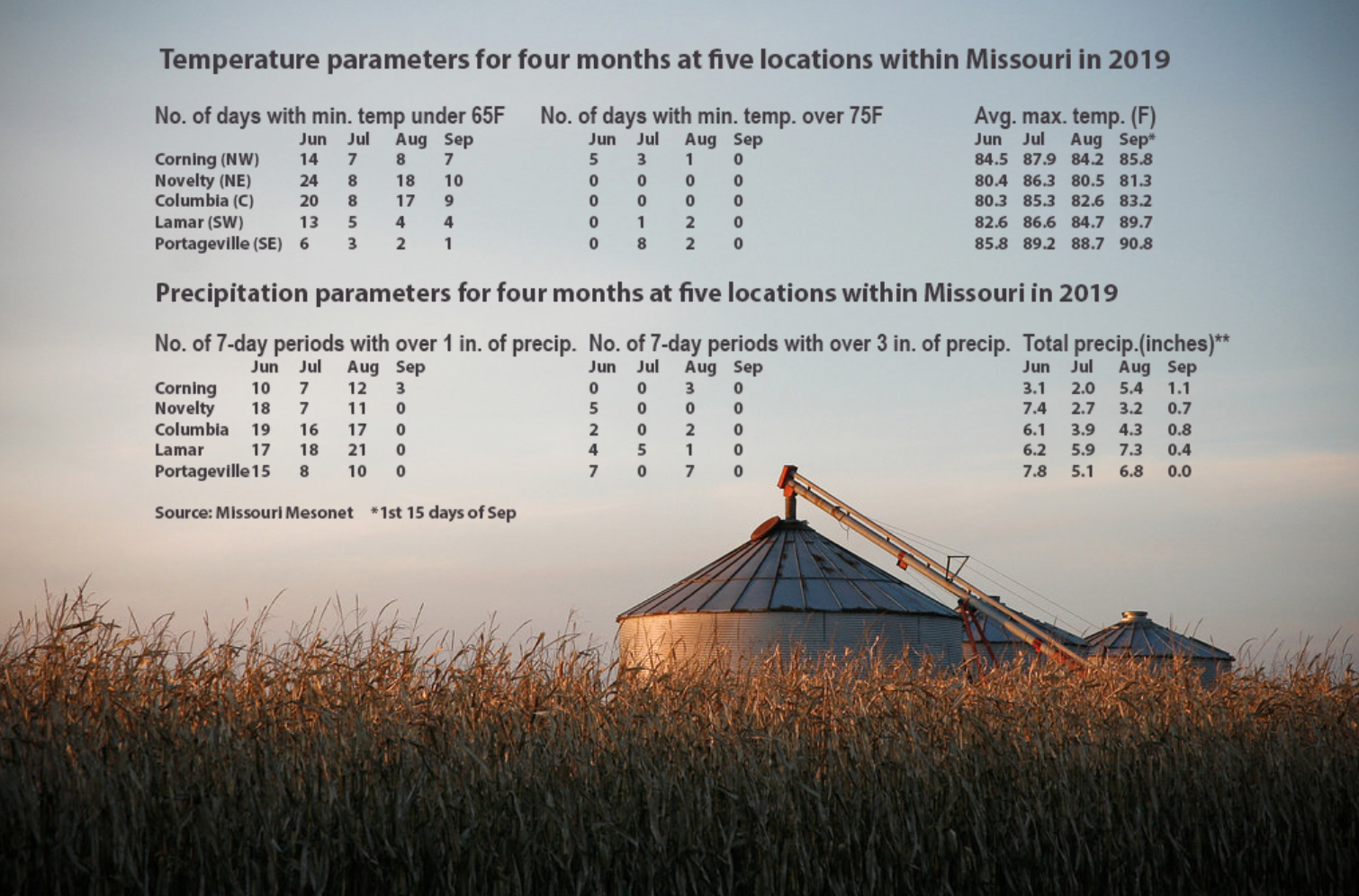 In a nutshell, night temperatures below 65 degrees Fahrenheit are good for yield and above 75 F are bad for yield, he says.

Wiebold found nights during June were unusually cool in much of Missouri. At Novelty and Columbia, temperatures dropped below 65 F more than two-thirds of the nights. Cool nights decreased growing degree day accumulation and slowed corn development in June.

“Late-planted corn would have benefited from warmer than normal daily minimum temperatures in June,” he says.

NASS reported that 80% of Missouri’s corn crop reached silk stage by Aug. 1, about two weeks later than normal. As a result, most corn grain fill occurred in August. Temperatures fell below 65 F most nights and only rose above 75 F occasionally. This should help yields, Wiebold says.

Minimum temperatures during August should help soybean yield also, he says. Due to late planting, more than 50% of Missouri’s soybean crop flowered after Aug. 1.

Wiebold says September night temperatures have not been a concern until recently, when maximum temperatures reached 10 to 20 degrees above normal. “These hot temperatures had little direct effect on soybean growth, but they increased water evaporation, and that aggravates lack of rain,” he says.

Precipitation—too much or too little—challenged Missouri corn and soybean farmers during the entire 2019 growing season. For normal soybean and corn yields, fields need a little more than an inch of rain each week.

One of the worst weather patterns for yield is wet spring weather preceding drought stress, Wiebold says. When this happens, root systems may not recover. Small, unhealthy root systems cannot get enough water to plants.

The northern part of the state faced this weather pattern, with dry weather arriving as early as mid-June or July. Expect lower corn and soybean yields there as a result.

Many soybean fields are in the midst of rapid grain filling now due to late planting caused by the wet spring and normal double-cropping. Unfortunately, weather has turned dry, with little or no rain after mid-August. A week of hot, dry weather can negate “good” weather that occurred earlier. Rain from here on out will be too late for most crops, Wiebold says.

Hot, dry weather during grain fill can result in small seeds and premature plant death. Test weights for corn are often less than normal because of the stress. Seeds on soybean plants that die because of drought may stay green. Buyers often dock green seeds.

“Farmers needed an unusually cool and wet August and September,” Wiebold says. “Some parts of the state saw that type of weather in early to mid-August, and I was optimistic. But September has been too dry and hot to maintain grain fill for late-planted soybean fields, and yield will likely be hurt.”

The University of Missouri contributed this article.