Subsequently, we were able to get a critical mass of seed to germinate from 12 of these collections to evaluate plants for possible dicamba tolerance in three separate greenhouse screens conducted throughout the winter months.

In order to get an indication of what is happening over time with the relative dicamba tolerance of Palmer amaranth in Tennessee, we used three susceptible check populations that were sourced from Palmer amaranth seed collected anywhere from eight to 29 years ago.

The good news is that the labeled rate of 0.5 lb/A of dicamba (12.8 oz Engenia/22 oz XtendiMax), provided very good (97% plus) control on 75% of the populations screened (see chart below). These results would indicate that under ideal conditions, even in these fields where numerous Palmer amaranth escaped dicamba applications in 2019, dicamba is still effective.

The concerning part of these data is that in four of the 12 fields, we saw 80% to 90% control when applications were made under ideal conditions, which included good heat, good humidity and using nozzles producing fine droplets (giving better coverage than nozzles labeled for field applications).

Populations from these fields had 5% to 10% survival (Picture left). At first glance some may think that is not a concern. However, please keep in mind that herbicides often work much better on weeds in a greenhouse environment than they typically will in your field.

My experience has been depending upon the herbicide and weed species, one can expect anywhere from 2x to 4x less control in the field than what is seen in a greenhouse setting.

The other concerning part is what the data showed at the less than 1x rate. At the very low 1/100x rate, the susceptible population showed better than 80% control while the Palmer populations from 2019 resulted in 8% to 42% control.

Again, we see this trend at the 1/3 to 1/2x rates where the three susceptible checks showed nearly complete control while the 12 populations from 2019 averaged about 80% control. These data would suggest that Palmer amaranth in Tennessee has developed an increase in dicamba tolerance over time.

Why so many escapes?

A question from producers with fields where good control was seen at the 1x rate is “how come I still had so many Palmer escapes”? The answer to this can be seen in the tests with the less than 1x rates where much better Palmer control occurred with the susceptible check populations compared with the populations collected in 2019.

That data would suggest that the first couple of years Xtend crops were on the market, Palmer could still easily be controlled under real-world field conditions where it was a little too tall at application.  Or thick mats of Palmer were present and made coverage an issue. Or maybe a rain shower occurred an hour after application. Good control under those real-world conditions could not be achieved with the enhanced dicamba tolerance seen in the populations of Palmer amaranth from 2019.

The most asked question is “are survivors of the 1x application resistant”? In weed science, there is a set protocol of tests that the offspring of weeds that have escaped herbicide applications must undergo before it can be concluded that they are “resistant.”

The Palmer that survived the 1x application have passed the first test. It will be a while before we have results from the other tests. However, there is enough evidence for me to have informed those growers that dicamba will likely not provide consistent control of Palmer amaranth in those fields. The growers said they intend to rotate those fields into corn in 2020.

This research was in part funded by the United Soybean Board, the Tennessee Soybean Promotion Board and Cotton Incorporated and we appreciate their support.

Dr. Larry Steckel is a University of Tennessee Extension weed specialist. He may be reached at lsteckel@utk.edu. 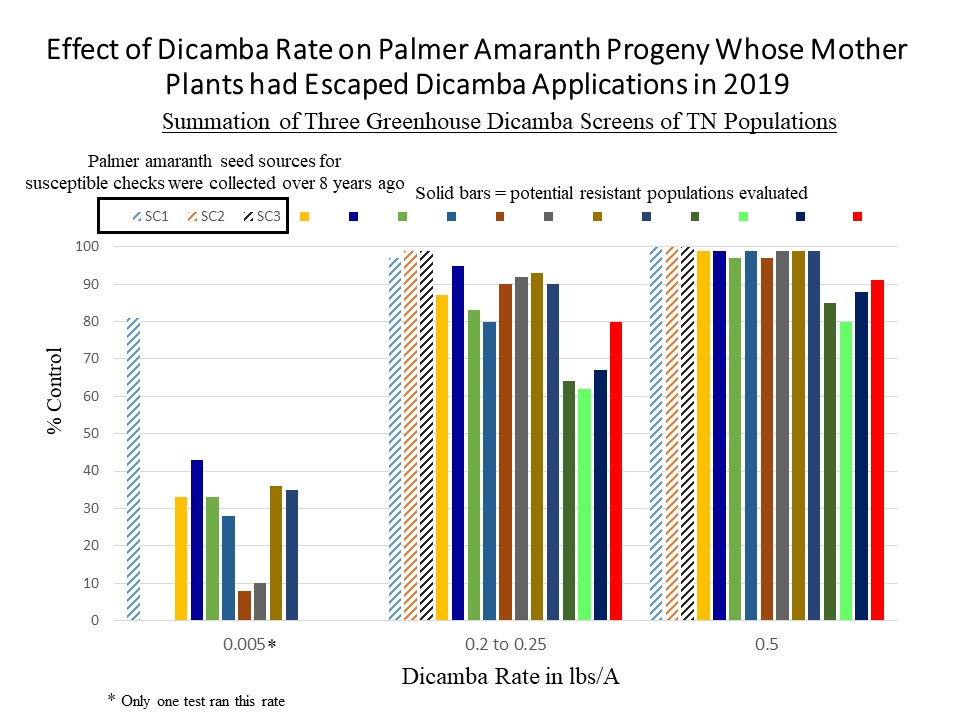