Stink bugs are more than a nuisance pest in soybeans, they cause direct damage to the crop by feeding on the developing pods. In this 2-minute video (below), entomologist and Extension specialist Dr. Dominic Reisig discusses scouting and management of this important pest.

Stink bugs are one of the major economic insect pests of soybeans in North Carolina every year. They’re seed-feeders and R4 to R5 is a prime time for stink bugs to feed because that’s when the pods and seeds are forming. Stink bugs will continue feeding through maturity. 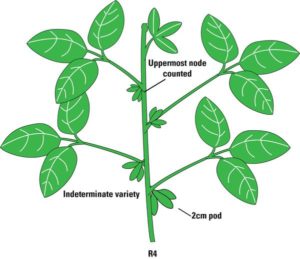 As we harvest our corn and move later on in the season these later planted soybean fields become green islands that attract stink bugs to feed there. So, it’s really important we scout this crop especially as we move later in the season. We have a number of different stink bug species.

When it comes to thresholds, three of them can be lumped together: the brown stink bug, the green stink bug and the Southern green stink bug. We also have the brown marmorated stink bug which is a little trickier to sample, but has the same threshold. Thresholds for Stink Bugs

Stink bugs can be scouted with either a sweep net if you’re on rows below 30 inches, or with a drop cloth if you’re on rows that are wider than 30 inches. It is important to use these scouting tools because that’s what our thresholds are based on. These tools can easily be purchased online at Gemplers, Amazon, BioQuip, or other vendors of integrated pest management tools.

We have a number of different effective products that will control stink bugs. Brown stink bugs are a little bit tougher to kill, so we recommend bifenthrin.

But for the green stink bug, the Southern green stink bug, and the brown marmorated stink bug there’s a number of different effective products. See the North Carolina Agricultural Chemicals Manual for more information on available and recommended products.

The brown marmorated stink bug (BMSB) can be easily identified by the alternating light and dark coloring pattern on the antennae. This is a non-native bug and is more common in cooler areas with higher elevations such as the Piedmont region of North Carolina.

It behaves differently than the other stink bug pests of soybeans and therefore should be scouted differently. It is, however, effectively controlled by the same materials as the green stink bug and the Southern green stink bug if thresholds have been met.

The brown stink bug is a native pest and is also brown but there is no striping in the coloration of the antennae. Although the thresholds for this species are identical to those of the green stink bug and the Southern green stink bug, control is more challenging.

For this reason, we specifically recommend application of the pyrethroid bifenthrin, due to its ability to best control this pest versus the other pyrethroids.

It is very important to scout your soybeans for stink bugs, focusing on those later planted fields. In the later part of the season our soybeans are the only host out there in the cropping environment for stink bugs to feed on. Remember to use the drop cloth and the sweep net to use thresholds effectively.

Jenny Carleo is a North Carolina State University area specialist again, agriculture – grain crops, for 19 counties. She may be reached at jscarleo@ncsu.edu