Mississippi farmers generated an estimated agricultural value of $7.35 billion in 2020, a 5% increase from 2019 that saw soybeans top forestry for the No. 2 spot behind poultry.

Keith Coble, head of the Mississippi State University Department of Agricultural Economics, said the year did not start out looking good.

“We did some midyear analysis on June 1, and the economic picture for farm products looked pretty bleak,” Coble said. “We went through unprecedented losses early to midyear, but markets have generally improved in the latter portion of the year.”

Josh Maples, an agricultural economist with the MSU Extension Service, said poultry took a hit from COVID-19-related issues and dropped 16% in value. But row crops were strong, posting a combined $2.6 billion estimated value.

“This was a turbulent year for all agricultural producers due to the market upheaval caused by the pandemic,” he said. “Poultry production was especially impacted during the spring by demand disruptions. Row crop markets also faced low prices and uncertainty early in the year before stronger prices in the fall helped boost the value of production.”

Although rebounding markets and prices helped the year end stronger than expected for some commodities, higher than normal government payments of an estimated $930 million helped make up some of the gap caused by early market devastation. In 2019, Mississippi growers received $599 million in various forms of government payments.

Josh Maples said coronavirus response programs made up a significant portion of the government payments.

“The Coronavirus Food Assistance Programs 1 and 2 were the primary relief programs for farmers who faced price declines and additional marketing costs due to COVID-19,” Josh Maples said. “The other programs included the traditional farm bill programs like Agriculture Risk Coverage, Price Loss Coverage and conservation programs.”

At an estimated value of $2.16 billion, poultry continues to be the state’s major ag commodity, despite declining from the $2.57 billion value it posted in 2019.

“The estimated 2020 Mississippi broiler value of production is $1.9 billion, which is down 19.5% due primarily to inventory disruptions during the spring and weaker prices,” Josh Maples said. “The number of broiler chicks hatched in Mississippi from April to June was 12% lower in 2020 than in 2019, and prices during these months were exceptionally low.”

While broilers were down, eggs were up 21%. Eggs make up about one-tenth of the overall value of poultry to Mississippi. Eggs increased to an estimated value of $260 million.

“This increase is driven by stronger prices, especially during the spring months,” Josh Maples said. “Eggs faced significant production challenges during the COVID-19 shutdowns while also experiencing a sharp demand increase due to grocery store demand. Sharply higher prices were the result of supply challenges at the same time as a demand increase.”

A large part of the supply challenge centered on the different demands of grocery stores and restaurants, as well as the supply chains that exist to meet each of these demands.

“Managing these issues improved, and egg prices were much lower in May and June than in March and April,” he said.

Forestry holds the No. 2 ag spot most years, but COVID-19 caused many sawmills to scale back production or temporarily close. When mills were not in operation, timber was not being cut and sold, so forestry declined an estimated 2.6% to an overall value of $1.12 billion.

Soybeans climbed to No. 2

That decline opened the door for soybeans to surge into second place overall with an estimated production value of $1.21 billion in 2020. Soybeans helped propel row crops to an overall increase of an estimated 21% over 2019 values.

Will Maples, an Extension row crop economist, said the crop’s value grew an estimated 67% over 2019 based mostly on an improved soybean market. Soybeans also reclaimed acreage lost the previous year.

“In 2019, suppressed prices due to the U.S.-China trade war and the loss of exports led to Mississippi growers planting the lowest number of soybean acres since 2005,” he said. “A main reason we saw a big increase in acres in 2020 was because we followed a year of record low acres.”

Market factors also helped the increase. Soybean exports to China increased in the fall of 2020, which led to a jump in prices that translated into an overall value increase.

Despite a decline of more than 9% from 2019 levels, cotton comes in as the No. 4 agricultural commodity with an estimated value of $491 million for cotton lint and cottonseed.

“As the year progressed, though, cotton prices recovered as economies opened back up, and that led to farmers receiving higher returns than were expected this spring,” he said.

While the pandemic put a new twist into ag markets, weather is always a factor. Will Maples said the wet spring prevented many producers from getting corn planted, which resulted in lower acreage. Corn’s value was down 10% to an estimated $387 million. 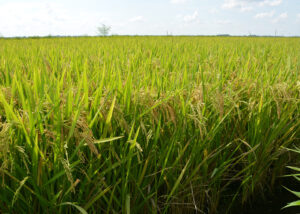 Rice was up 44% to an estimated value of $138 million. Peanuts posted a 34% estimated increase to $19 million. But, given the small amount of peanut acreage planted annually in Mississippi, Will Maples said a small change adds up to a big percentage shift.

Catfish also faced a turbulent year due to restaurant demand disruptions among other factors. Its value of production stayed flat in 2020, with an estimated value of $226 million.

Specialty crops remained at 2019 levels and together brought an estimated $106 million in production value to Mississippi. Sweet potatoes posted an estimated 1.8% increase for a 2020 value of $96.7 million.