Andre Reis was born and raised in the big city of Sao Paulo, Brazil, but at 16, he decided he wanted to go to the countryside and study agriculture. His career path has taken him to many places, the latest being the LSU AgCenter Dean Lee Research and Extension Center near Alexandria.

Reis’ role with the AgCenter will involve him working with soybeans and sugarcane in central Louisiana, two crops that make up significant acres in Louisiana, as well as his native Brazil. Most of his research work will be conducted at Dean Lee and the LSU AgCenter Iberia Research Station.

Reis started with the AgCenter Dec. 1, 2021. One of his first priorities is variety tests for both soybeans and sugarcane.

“One of the things I will be doing is observing traits in relation to cold tolerance of different sugarcane varieties,” Reis said. “The length of the growing season is also influenced because of the cooler weather in the central part of the state.”

When Reis moved from the big city, he landed in Piracicaba, Sao Paulo, which is the birthplace of the Brazilian sugarcane industry. In 2002, he began his undergraduate studies, receiving his bachelor’s degree in agronomy in 2007. He received his master’s in 2013 and a doctorate in 2017 in crop science.

Agriculture has brought Reis to many locations, both in his native country and the United States. During his academic career, he spent one year in Michigan working with seed corn production. He also spent time working in the Brazilian Cerrado, one of the most biodiverse savannas in the world.

“I spent seven years working as a consultant in the north area of Brazil,” Reis said. “We were converting pastureland to row crops for the first time. There were many fertility issues involved.”

Reis said the land use conversion did not have a manual, so much of the work involved trial and error.

“We were doing it from scratch,” he said. “I was involved in a lot of on-farm trials, and much of my research focused on soybeans and low-land rice.”

He enjoys doing research because he believes it has a real-world application and can bring changes that benefit farm production.

Reis spent time as an agronomist for John Deere, working for its Latin America Innovation Center. His primary duties were exploring innovative techniques for improving soybean and sugarcane production systems that would lead to higher yields.

Prior to accepting the AgCenter assignment, Reis had a research assignment at Kansas State University focusing on nutrient management in wheat, soybean and corn crops.

Reis’ appointment is 75% research and 25% Extension. 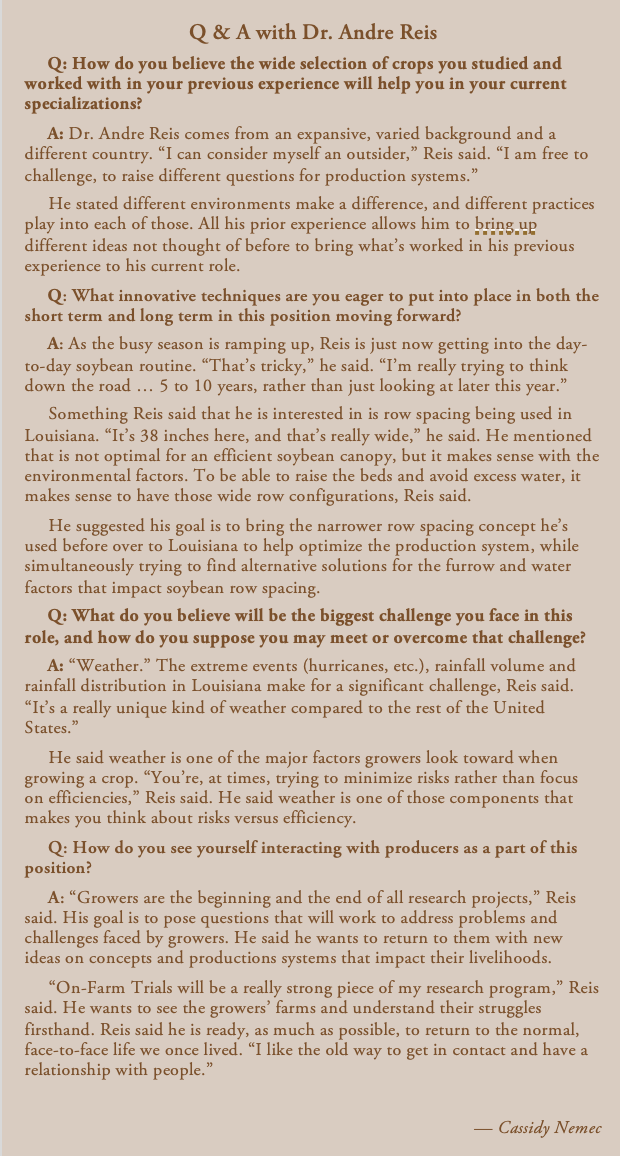 Kenneth Gautreaux is a communications specialist with LSU AgCenter.