Keep ‘eyes on the field’ to protect the bottom line

In the South, consultants keep a sharp lookout for economic thresholds of insect pests and take action when necessary to keep them under control.

Soybean insects are monitored closely throughout the season in the South to spot populations that have the potential to adversely affect yields.

Some of these pests feed on foliage, others on pods and some on both foliage and pods.

In the worm complex, foliage-feeders, such as soybean loopers and armyworms, can appear early and cause extensive “stripping” of the soybean plant if they show up in high enough numbers. The general threshold for these worms is 35 percent defoliation before bloom and 20 percent after bloom.

“A massive population of loopers can cause a huge yield loss if they strip the foliage off the plant when soybeans are at the R5 or R5.5 stage,” he says. “They can skeletonize the plant in two to three days. If you lose all of your leaves and the pods or the soybeans inside the pods are immature, they won’t fill out.”

The corn earworm will feed on leaves, flowers and pods.

Miller says corn earworms in soybeans are erratic in his area, but when they do appear in high numbers, they can cause substantial yield loss.

“Corn earworms, for the most part, are pod-feeders, but I have seen them come in early and feed on leaves and blooms,” he says. “We typically don’t have to spray for them at this time, but we do watch closely to make sure they don’t reach the 35 percent defoliation level.

“If corn earworms begin to attack small pods, we apply an insecticide with fast knockdown. In our area, one application is usually enough to control them unless another generation appears. In that case, an additional spray is a possibility.”

Other modes of action replace pyrethroids

For many years, pyrethroids were the go-to treatment for soybean worm pests. However, as these products began to lose efficacy, other modes of action for worm control were brought to market.

For example, Dow AgroSciences introduced an insect growth regulator called Intrepid 2F, which was effective against many species of lepidopteran insects, including the soybean looper. But it didn’t control corn earworm. However, it did provide good residual control on treated foliage.

To boost the efficacy of this product, the company added another mode of action.

“Intrepid Edge has two modes of action, spinetoram (Radiant in cotton) and methoxyfenozide, that are proprietary to Dow AgroSciences,” says Drew Ellis, market development specialist. “In our trial work, we have seen 70 percent mortality in 24 hours on corn earworm.

“The new mode of action brings fast knockdown on a broader spectrum of pod-feeding worms, while the mode of action from Intrepid 2F still provides the residual on foliage-feeding pests that farmers and consultants have been accustomed to. The recommended application rate for Intrepid Edge is 4 to 6.4 ounces per acre.”

As the 2016 season gets underway, consultants will have “eyes on the field” to detect potentially damaging insect levels and make insecticidal recommendations when necessary.

To be able to walk out in the field soon after an application is made and not see any worms is a good way to achieve peace of mind during the fast-paced soybean growing season. 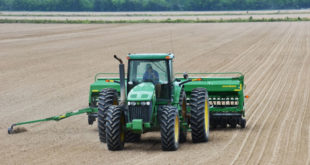 • By Craig Gautreaux • Soybeans are Louisiana’s largest crop in terms of acreage, and …