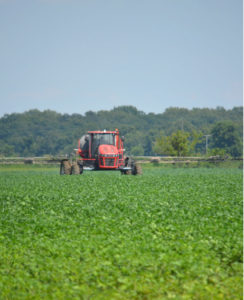 Alabama producers with dicamba-tolerant crops in the ground are struggling to come to terms with a constantly changing situation surrounding a California Circuit Court ruling. California’s Ninth Circuit Court of Appeals issued a dicamba ban effective immediately for XtendiMax, Engenia and FeXapan. This circuit court has issued a number of orders against pesticide and herbicide use on crops in recent history.

Steve Li, an Alabama Cooperative Extension System weed scientist, said while the California circuit court issued a ban verdict, the Environmental Protection Agency said in a June 8 press release, growers and commercial applicators may use existing stocks  in their possession on June 3, the effective date of the court decision. When using, producers must be consistent with the product’s previously approved label. Use of these products may not continue after July 31.

“This means Bayer, BASF and Corteva will stop shipping XtendiMax, Engenia and FeXapan to distributors in Alabama. Also, no new purchases are allowed,” Li said. “Producers can use previously purchased chemicals under the guidelines in their revoked labels until July 31. Producers still need to follow all application requirements and cut-off dates specified in the federal labels.”

Dicamba is a selective herbicide in the benzoic acid family of chemicals. The product’s registered agricultural uses include corn, wheat, dicamba-tolerant cotton and soybeans. Non-agricultural registered uses include use in residential areas, on roadsides and on golf courses.

“At these non-agricultural sites, people primarily use it to control broadleaf weeds such as dandelions, chickweed, clover, vetch and ground ivy,” Li said. “Only dicamba products registered for use on genetically engineered cotton and soybeans can be applied ‘over the top’ — or to growing plants.”

Any usage outside label instructions is a violation of the Federal Insecticide, Fungicide and Rodenticide Act. Potential drift problems and resulting crop damage prompted manufacturers to agree to mandatory training for producers and applicators. This training aims to reduce application errors and increase producer awareness and productivity.

Li said the recent ruling generated panic. Producers who planned to apply the herbicide now struggle to understand what a California ruling means to an Alabama farm.

“Many growers are ‘panic buying’ as much of the dicamba chemical as they can because manufacturers have already stopped allowing dealers to place more orders,” Li said. “A few stores sold out of one year’s supply of dicamba within a day. Growers were hoping to get enough to be able to make the applications they planned for the summer growing season. However, the latest decision from EPA has put an end to that.”

Li headed up the auxin trainings around Alabama. He said there are still inquiries surrounding training from producers. Currently, the only training options are online through Bayer and BASF. However, he said these options may not be available long term. He is unsure of how the ban will affect dicamba training and usage next season.

“My biggest concern at this point is some growers who did not book enough XtendiMax, Engenia or FeXapan for their planned applications may turn to illegal generic chemicals,” Li said. “One of these chemicals (Banvel) is a formulation of dicamba with the highest volatility potential of formulations on the market.”

David Russell, also an Alabama Extension weed scientist, said Tavium — a Syngenta premix of dicamba and S-metolachlor — is currently the only labeled dicamba product that survived the court ban. This means producers can still apply this particular crop input on dicamba-tolerant crops.

“Tavium survived the ban because it did not have EPA registration at the time parties filed the lawsuit in California,” Russell said. “Tavium is a premix of dicamba plus S-metolachlor and has an application cutoff in soybeans at V4 — or 45 days after planting. This is a shorter application window than the other three dicamba products.”

Producers cannot use Tavium in double-crop soybeans. They can apply it to tolerant cotton varieties up to the six-leaf stage or 60 days after planting. Guidelines allow only one application of Tavium over the top of resistant cotton and soybean variety.

“This news is especially troubling for soybean growers who have depended on dicamba in-season, because producers can’t rely on Liberty like they do in cotton,” Russell said. “Alternative options in RR2 Xtend soybean include many of the Group 14 herbicides like Flexstar GT, Reflex and Prefix if PPO-resistant Palmer amaranth is not an issue.”

In a swift decision, both Bayer and BASF announced  June 5 that their products — Xtendimax and Engenia — are temporarily suspended. These two companies will also halt all new chemical shipments to dealers. Both companies issued statements condemning the decision from the Ninth Circuit Court.

“The 2020 growing season is well underway and this creates undue burden for our first conservationists — farmers,” Wheeler said. “The EPA has been overwhelmed with letters and calls from farmers nationwide since the court issued its opinion, and these testimonies cite the devastation of this decision on their crops and the threat to America’s food supply.”

Wheeler also said the court itself noted in this order that it will place a great hardship on America’s farmers.

“This ruling implicates millions of acres of crops, millions of dollars already spent by farmers and the food and fiber Americans across the country rely on to feed their families,” Wheeler said. “EPA is assessing all avenues to mitigate the impact of the Court’s decision on farmers.”

Chemical labels up for review

“XtendiMax, Engeia and FeXapan labels are up for review in the fall of 2020,” Li said. “The implication of this verdict on label renewal is unclear at the moment.”

Li said there are new dicamba formulations close to release as long as the products can pass muster this fall to obtain labels. Li devoted many of his trials to testing the next generation of dicamba products before they are registered and released to the market.