EPA reaffirms position that glyphosate does not cause cancer 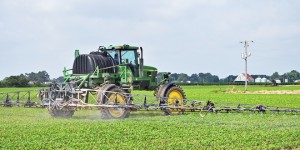 The U.S. Environmental Protection Agency has taken the next step in its review of glyphosate.

As part of the action, the agency reaffirms its findings that the herbicide poses no risk to public health when used according to the current label and that it is not a carcinogen, according to an EPA news release. The agency’s scientific findings on human health risk are consistent with the conclusions of science reviews by many other countries and other federal agencies.

While the agency did not identify public health risks in the 2017 human health risk assessment, the 2017 ecological assessment did identify ecological risks. To address these risks, EPA is proposing management measures to help farmers target pesticide sprays on the intended pest, protect pollinators and reduce the problem of weeds becoming resistant to glyphosate.

“EPA has found no risks to public health from the current registered uses of glyphosate,” EPA Administrator Andrew Wheeler said in the news release. “Today’s proposed action includes new management measures that will help farmers use glyphosate in the most effective and efficient way possible, including pollinator protections. We look forward to input from farmers and other stakeholders to ensure that the draft management measures are workable, realistic, and effective.”

Glyphosate is the most widely used herbicide in U.S. agriculture and has been studied for decades. It is used on more than 100 food crops, including glyphosate-resistant corn, soybeans, cotton, canola and sugar beets. Non-agricultural uses include residential areas, aquatic areas, forests, rights of way, ornamentals and turf.

Once the Federal Register notice publishes, the public will be able to submit comments on EPA’s proposed decision at www.regulations.gov in docket # EPA-HQ-OPP-2009-0361.

Public comments will be due 60 days after the date of publication in Federal Register. EPA’s responses to the comments received on the draft ecological and human health risk assessments and the benefits assessment will be in the docket.

The glyphosate draft risk assessments and supporting documents can be found at https://www.epa.gov/ingredients-used-pesticide-products/draft-human-health-and-ecological-risk-assessments-glyphosate.