With a focus on economic development, the South Carolina agricultural industry is poised for positive productivity in 2019.

“The United States had a large cotton crop in 2017, coming in at 20.92 million bales,” Smith says. “The demand remains strong, although growth is slowing.”

The slow growth is contributed to events such as an early season drought that is expected to lead to the abandonment of many acres of cotton in the Southwest. A report from the U.S. Department of Agriculture shows U.S. cotton production was down 7 percent from October to November 2018. The South Carolina yield is down due to hurricanes Florence and Michael, and the size of the crop is likely to get smaller with late and failed harvest.

Cotton prices for 2019 probably will remain about 75 to 79 cents per pound. Cotton acreage is expected to hold at about 14 million across the United States, with 300,000 acres in South Carolina.

Domestic use for peanuts is increasing, but the key will be exports. About half of the United States peanut exports go to Canada and Mexico.

China has become a big buyer but currently is priced out of the market. Retaliatory tariffs from China could be a deal breaker for future U.S. exports to the country, Smith says. In a trade dispute, China and the United States have imposed new tariffs against goods imported from each country. 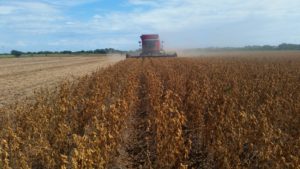 Chinese tariffs on U.S. goods include soybeans. A total of 400,000 acres of soybeans were planted in South Carolina in 2017 for a value of almost $138 million. Because of tariffs, soybeans have not been moving, leading to increase supplies.

“The soybean supply has been increasing while the demand has been flat,” Mickey says. “We need fewer acres of soybeans because with the current excess supply, it’s going to be difficult for South Carolina farmers to cash flow soybeans in 2019.”

“The price spread is narrowing,” Mickey says. “But watch what happens with planting intentions.”

Livestock and other crops

The outlook for livestock also depends on trade tariffs. Nelson says prices aren’t as good as last year and are seeing volatility. The demand for pork remains strong, but packer – livestock wholesale broker, dealer or distribution – margins are a bit tighter than last year.

Nelson advised conference attendees to keep an eye on trade conflicts because U.S. pork and beef exports are substantial drivers in the current market situation.

Other topics discussed during the conference included an outlook on the southern timber market by Yanshu Li, a forest economist and taxation outreach specialist from the University of Georgia. Li said demand exists for timber products with recovery of the housing market, but a large inventory will continue to keep saw-timber prices down. Pulpwood prices are expected to remain strong but will feel downward pressure from increased lumber production.

“Our focus is on economic development,” Weathers says. “Our goal is to position agriculture in an aggressive fashion so that the state as a whole will benefit from this valuable resource.”