Scientists and farmers have described yellow nutsedge as a ‘super weed’ that is naturally resistant to most herbicides labeled for soybeans and rice. Today, STS soybeans and Permit Plus offer growers another approach to help control nutsedge.

One of the toughest weeds around

Yellow nutsedge has been described as a “super weed” by weed scientists and farmers alike. This hardy perennial is difficult to manage due to its tolerance to heat, drought, flooding and cold temperatures. In addition, it spreads and propagates through an underground network of rhizomes, bulbs and small, starchy tubers called “nutlets.” If all that wasn’t bad enough, yellow nutsedge is naturally resistant to most herbicides labeled for soybeans and rice, including glyphosate. “Several consultants commented about 2013 being a ‘nutsedge year,’ and we received a number of calls about nutsedge control in soybeans,” says Dr. Ford Baldwin, president of Practical Weed Consultants, LLC in Lonoke, Ark., and former University of Arkansas weed scientist. “We’re doing a good job on almost everything else, but nutsedge still poses a significant problem for rice and soybean growers in Arkansas. Traditional Roundup Ready and LibertyLink herbicide programs do a fine job on most of our weed problems, they’re weak on nutsedge, dayflower and a few other species.”

“To manage the threat of herbicide resistance, we recommend a programmed approach for nutsedge and other weeds,” adds Baldwin. “The best program for nutsedge control in soybeans, before planting or incrop, is to plant STS soybeans and use Permit Plus.”

Baldwin cautioned growers to make sure the soybeans they plant are STS tolerant before applying Permit Plus, since the product will kill soybeans without STS tolerance. “I remember a call early one morning a few years ago,” he recalls. “The farmer asked what would happen if he sprayed Permit on his non-STS soybeans, to which I responded that it would kill them graveyard dead. After a short pause, he said, ‘Well, I guess I know what’s wrong with mine then. But it sure did a good job on my nutgrass.'” According to Dr. Bob Scott, professor, Extension Weed Science at the University of Arkansas, Permit Plus adds another mode of action to Roundup Ready and LibertyLink programs. “The main strength of Permit Plus is definitely nutsedge control, but it does help control dayflower, northern jointvetch, morningglory, hemp sesbania, smartweed and some other weeds found in Arkansas. “Having said that, it’s not really going to help with resistant pigweed, as many of those populations are resistant to ALS herbicides as well,” Scott says.

To see how the product rates in terms of crop safety and year-end yields, Gowan hired Dr. Ronnie Helms of G&H Associates in Stuttgart, Ark., to conduct a series of small plot studies with Permit Plus on several STS soybean varieties. “We conducted studies on five different Roundup Ready/STS varieties in the 4.7 to 5.3 maturity range during the 2013 growing season: Asgrow 4832, Pioneer 95Y31, Pioneer 49T24SR and Syngenta S48-P4 and Stine 5200-4. We also evaluated Stine 47L- 008 – a Liberty Link/STS variety. “Our goal was to evaluate the response of these varieties to Permit Plus based on genetic diversity, application timing and application rates,” Helms continues.

“While all these varieties showed good tolerance to Permit Plus applications during the early V2- V3 growth stage, even at twice the labeled 0.75 ounce-per-acre rate, there was some yellowing at the higher rate when the beans were sprayed at the early reproductive growth stage (V6-R1).” Helms noted that yields in his test plots ranged from 55-69 bushels per acre. “Overall, the STS varieties appear to be pretty tolerant to Permit Plus, especially when sprayed during the early growth stages. The product worked really well in the Stine 47L-008 plot, as LibertyLink programs are notoriously weak when it comes to nutsedge control.”

Since Permit Plus is labeled for rice as well as STS soybeans, it offers growers and aerial applicators an added margin of safety compared to some other herbicides. “When you have rice grown next to soybeans, planting STS beans gives you the option of using Permit Plus without fear of damaging either crop,” Helms adds. “That’s an important consideration, given all the liability issues that arise from herbicide drift issues.” Baldwin echoed Helms statement and added, “The flexibility to use Permit Plus in both rice and soybeans is often an overlooked advantage. By using Permit Plus, you avoid drift issues and still get good control of yellow nutsedge and other key weeds.” 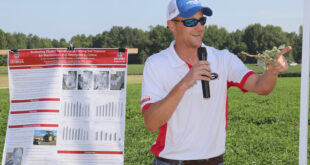