If yields continue as they have been this season, Arkansas is set to break a state yield record.

The U.S. Department of Agriculture’s National Agricultural Statistics Service forecasts Arkansas’ soybean harvest will be 175 million bushels, up 20 percent from 145.7 million bushels in 2016.

Some growers only irrigated five to six times compared to a typical season where they would need 10 to 11 irrigations.

In the Grow for the Green state yield contest, nine producers topped 100 bushels per acre this season, up from the previous seven fields that made or exceeded the 100 bushel benchmark.

“I see that as a kind of barometer of how good a year we had,” Ross said in a university news release.

Despite the strong yields, Arkansas’ soybean crop had to overcome some big problems this year, including dicamba drift.

Not all growers were so fortunate, though. In areas where symptoms appeared during flowering, growers saw considerable yield loss.

“We saw yields all over the board because of off-target dicamba,” Ross says. “Growers reported yields as low as 11 bushels per acre. But others didn’t think they lost any yield even though they had dicamba symptoms early on.”

A severe outbreak of red-banded stinkbug late in the season also damaged some fields, he says.

“They became an issue right at the end of the season,” Ross says. “We knew they’d show up, but we didn’t know the population would explode like it did and do the amount of damage we saw.”

The red-banded stinkbugs caused significant damage because of when they showed up, he says. By the time the pests were in the fields, a lot of farmers had expended their pest control budgets and elected not to spray.

Ross would like to see a cold winter with several days of freezing to help knock down the stinkbug population and reduce the numbers carried over into the 2018 season. 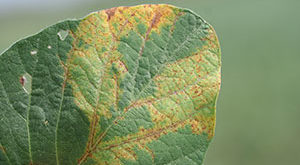