Multiple studies conducted by several Mid-South universities have shown positive results in soybeans where insecticide seed treatments have been used.

Insecticide seed treatments (IST) have provided a positive return in the Mid-South in nearly 80 percent of research trials when compared to an untreated check (with a fungicide), according to multiple studies conducted over seven years by entomologists from the University of Arkansas Division of Agriculture, Louisiana State University, the University of Tennessee and Mississippi State University.

There may be several reasons for this, but changes in production practices in recent years have changed the pest spectrum and made ISTs a very viable option for growers.

Many growers are moving toward reduced tillage production practices, which are more favorable for the soil-dwelling insects. Increasing costs of production along with the increasing value of soybeans add more pressure to growers and make it even more important to get the crop up to a good, healthy start.

Soybeans grown under the early season soybean production system face the most stress. Often, when growers plant in early April or even late-March, it can turn cold and wet, making it a struggle for plants to survive. While these plants are stressed, pests can attack and cause damage to the developing plant.

We have documented control of several pests including grape colaspis (lespedezaworm), thrips, grubs and threecornered alfalfa hoppers as well as suppression of bean leaf beetles.

Another positive attribute to ISTs is an increase in plant stand and vigor. While not as consistent as the insect control, it is often observable, and, the more stressful the situation, the more pronounced it can be seen.

ISTs are especially useful if you have had a history of pests in a field, have a lot of plant residue in the field at planting, have other stress factors associated with the field or if you’re concerned about the weather conditions.

Growers have several IST choices for 2011. Cruiser and Gaucho were the first products available and the ones we have the most data on; however, there are two new seed treatments, which should provide similar attributes. These are the Inovate system and Acceleron. We encourage growers to price these seed treatments being careful to consider fungicide packages along with the IST component to get the best value.
Based on this research data, ISTs can provide real value to growers.

Gus Lorenz is an entomologist with the University of Arkansas Division of Agriculture. Contact him at glorenz@uaex. 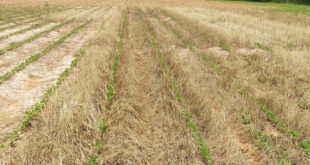