New product introductions and research are giving soybean growers more options to fight key pests that have been problematic over the past several years. It’s a welcome respite for growers tackling a number of emerging pest management issues.

Growers now have a newly registered insecticide (April 2012) with a dual mode of action to help address tough management issues. Justice insecticide, marketed by Gowan Company, is a combination of acetamiprid and bifenthrin.

“Acetamiprid is a neonicitinoid that causes paralysis of target pests after ingestion with long residual against labeled pests,” says Chad Dyer, Justice product manager for Gowan Company. “Bifenthrin aids in a quicker knockdown and is one of a few synthetic pyrethroids that is relatively stable in direct sunlight.”

Alan Blaine is a crop consultant based out of Starkville, Miss. As a former Mississippi Extension soybean specialist, he’s well versed on the challenges of current pest control issues as well as those potentially posing a threat.

“Two applications controlled the labeled pests we were faced with last season,” Blaine adds. “That’s only one season of experience, but it worked and worked well. I’ve tried other mixtures that have let me down. Obviously, I want something that works.”

New soybean pests are also a concern. The kudzu bug – Megocopta cribraria – is closely related to stinkbugs. First discovered in the eastern United States, the species is spreading westward to other Southern states.

“We’re seeing kudzu bug for the first time,” Blaine says. “I wouldn’t be surprised if that becomes a big problem in the next couple of years. We’ve also been seeing more podworm in the last couple of years. Overall, we’re seeing some shifts in pest populations that will take a little closer attention to deal with as we go forward.”

Get familiar with the details

Justice is a liquid oil flowable (OF) formulation.

“We tested several formulations and the OF formulation provided the best results,” Dyer says. “It proved to be the most stable solution to enable both active ingredients – acetamiprid and bifenthrin – to remain in the most biologically active forms.”

In Southern soybean production, Justice insecticide will be labeled at a use rate of up to five oz/A.

Soybean looper and armyworm species require the higher labeled rate. The upper end of the labeled rate is also recommended if pest populations are significantly above economic thresholds at time of treatment.

Information for this article was provided by Gowan Company. 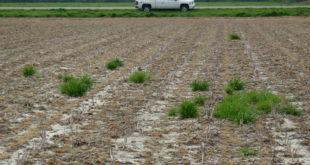