Non-irrigated, no-till study began in the fall of 2005, using a controlled traffic system to evaluate the life expectancy of different bed heights and the effect on yields.

Crop residue management with raised beds in a controlled traffic system on flat land is essential for successful no-till production on old beds. The crop residue left on the soil surface not only reduces soil erosion but is the building block for increased soil organic matter and soil aggregate stability.

Research by USDA-ARS at Auburn University also has shown that controlled traffic systems, where machinery wheels always run between the rows, can reduce soil compaction in a range from 90 to 30 percent.

A non-irrigated study was initiated in the fall of 2005 to evaluate no-till production on old beds in a controlled traffic system and to determine the life expectancy of different bed heights with no-till production. This study was conducted on a Leeper silty clay loam soil with 0.15 percent slope.

All of the treatments, except the Paratill followed by coulter-bed-roller (8 to 9-inch bed height) treatments were a one-pass tillage system. After harvest, no corn stalks were mowed on all treatments. A coulter was mounted in front of each 12-inch buster sweep to cut through the crop residue. No-till production was used on all 2005 bed treatments.

For more uniform planting depth and soil warm-up, the planter was equipped with trash wheels to move the residue from the row. The soybeans were in an every-other-year-rotation with corn that had the same tillage production systems.

Soybeans showed less yield response differences to the raised beds than corn. However, the five-year (2006-2010) analysis indicated that the yields for the continuous no-till production on the five to six-inch beds (formed the fall of 2005) were 45 and 47 bushels per acre, respectively.

When P and K fertilizers are needed, fall application with moist or dry soil conditions is essential to avoid soil compaction. A coulter placed in front of the buster also is essential when bedding to keep the crop residue from plugging the bedder. The roller on the bedder implement flattens, firms and smooths the bed.

During the planting operation, trash wheels are essential to remove old crop residue from the row. To facilitate better water movement through the field with furrow irrigation, the row middles may need to be swept to remove the old crop residue.

Dr. Normie Buehring is a Mississippi State University agronomist at the North Mississippi Research and Extension Center in Verona. 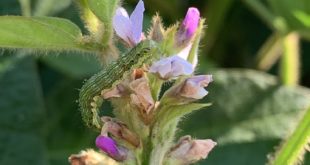 The use of biological insecticides for bollworm management in soybeans

• By Whitney Crow, Angus Catchot, Jeff Gore and Don Cook • There are several …